In order to familiarize ourselves with the typical Vale workflow, we'll be referencing a sample repository that contains the required components of a Vale configuration.

If you're on Windows, we recommend using Windows Terminal instead of the default Command Prompt (which doesn't support all of Vale's features, as shown below): 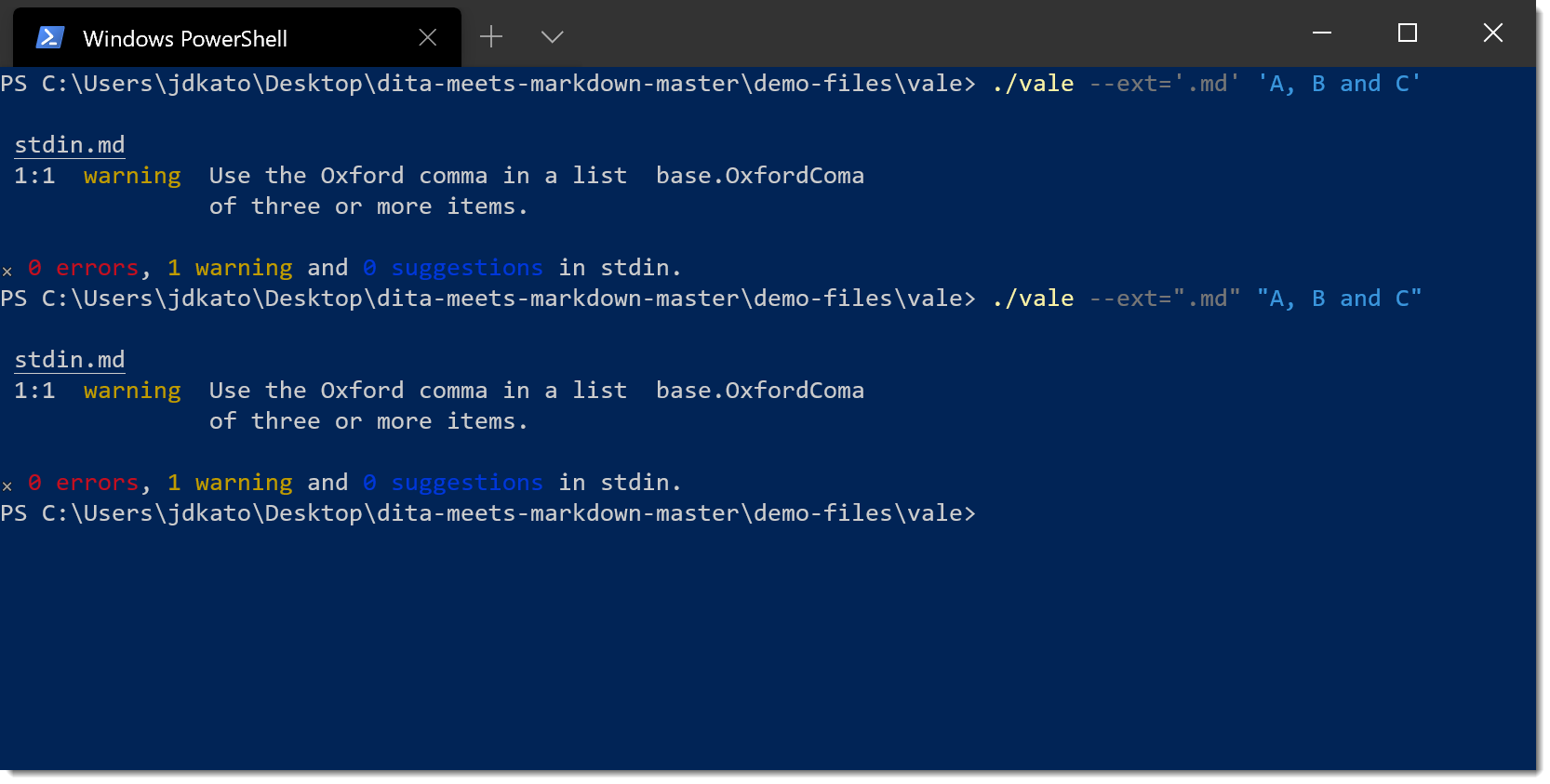 The first component we're going to discuss is our StylesPath (the /styles directory):

This is where you'll store all of your Vale-related files (with the exception of .vale.ini, discussed below).

In the example above, the Microsoft and write-good top-level directories are both styles. These are collections of individual writing rules packaged together to enforce guidelines from a third-party organization or tool.

In practice, you'll typically come across two types of styles:

The dedicated styles section explains how you can create your own custom style. You can also browse our collection of pre-made, open-source styles.

The Vocab directory is a special directory designed to supplement your styles. Each of its child directories—in this case, Blog and Marketing—contain two files: accept.txt and reject.txt.

These files allow you to control rule "exceptions" (such as what is considered a spelling error) without having to modify the style's source itself.

The .vale.ini file is where you'll control the majority of Vale's behavior, including what files to lint and how to lint them:

In the sample repository, README.md represents the content we want to lint. And while you probably have a lot more content than a single Markdown file, this example demonstrates one of Vale's most useful features: its support for different markup languages.

In practice, this means that you can use Vale on "real-world" markup (that contains front matter, source code, tables, lists, etc.) and Vale will be able to both intelligently apply rules to and completely ignore certain sections of text.

At its core, Vale is designed to be used as a command-line tool. The available commands and options are discussed below.

Print the current configuration options (as JSON) to stdout.

(See Configuration for more information about the available options.)

Where existence could be any of the available extension points.

The --glob option specifies the type of files Vale will search. It accepts the standard GNU/Linux syntax. Additionally, any pattern prefixed with an ! will be negated. For example,

This option takes precedence over any patterns defined in your configuration file.

The --config option specifies the location of a configuration file. This will take precedence over the default search process.

The --output option specifies the format that Vale will use to report its alerts.

To use a custom format, pass the path to a template file through the --output option:

Template files have access to all of the sprig template functions, in addition to a few Vale-specific functions:

Where core.Alert has the same information as Vale's --output=JSON object.

Returns the given STRING with an ANSI-formatted red foreground color.

Returns the given STRING with an ANSI-formatted blue foreground color.

Returns the given STRING with an ANSI-formatted yellow foreground color.

Returns the given string with an ANSI-formatted underline.

Appends the given row to the given table (created with newTable).

Prints the table-formatted output to stdout.

The --ext option allows you to assign a format (e.g., .md) to text passed via stdin (which will default to .txt).

The --no-wrap option disables word wrapping when using the CLI output format. By default, CLI output will be wrapped to fit your console.

The --no-exit option instructs Vale to always return an exit code of 0, even if errors were found. This is useful if you don't want CI builds to fail on Vale-related errors.

The --sort option instructs Vale to sort its output by file path. For large directories, this can have a noticeable impact on performance.

The --ignore-syntax option will cause Vale to parse all files as plain text. Note, though, that this doesn't change what files Vale will search.

This will often boost performance significantly, but only text-scoped rules will work.

The --minAlertLevel option sets the minimum alert level to display. This takes precedence over the value set in a configuration file.

Where LEVEL is suggestion, warning, or error.